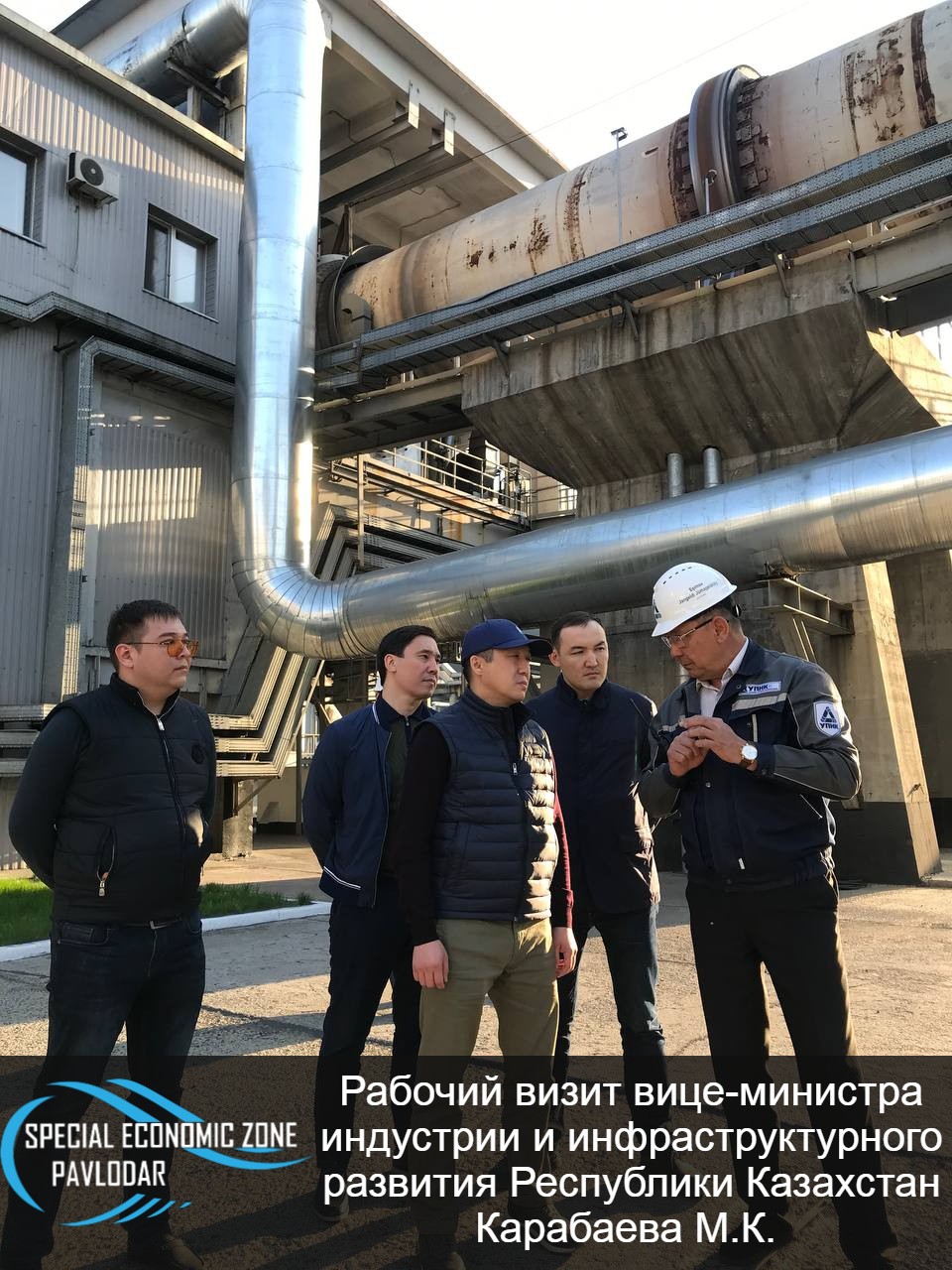 Working visit of Vice-Minister of Industry and Infrastructure Development of the Republic of Kazakhstan M.K. Karabayev

On May 8, 2022, Vice Minister of Industry and Infrastructure Development of the Republic of Kazakhstan Marat Karimzhanovich Karabayev paid a working visit.
The purpose of the trip was to familiarize with the activities of the current and ongoing participants of the special economic zone "Pavlodar".
The guest was shown the potential of the FEZ, the dynamics of its development and a number of successfully implemented projects, such as:
1. JSC "Caustic" (production of caustic soda and chlorine);
2. UPNK-PV LLP (calcination of crude petroleum coke);
3. Vector Pavlodar LLP (production of automobile discs);
4. Giessenhaus LLP (production of alloyed aluminum);
5. PO ASCOR LLP (production of composite coagulants);
6. Kazcenospheres LLP (production of aluminosilicate microspheres);
7. Kazmunaikhim LLP (production of additives and other low-tonnage chemicals);
8. RTF ACTICA LLP (activated carbon production).
Marata Karimzhanovich noted the prospects for further development of the Pavlodar SEZ, and also expressed readiness to assist in solving emerging issues of the participants of the Pavlodar SEZ. 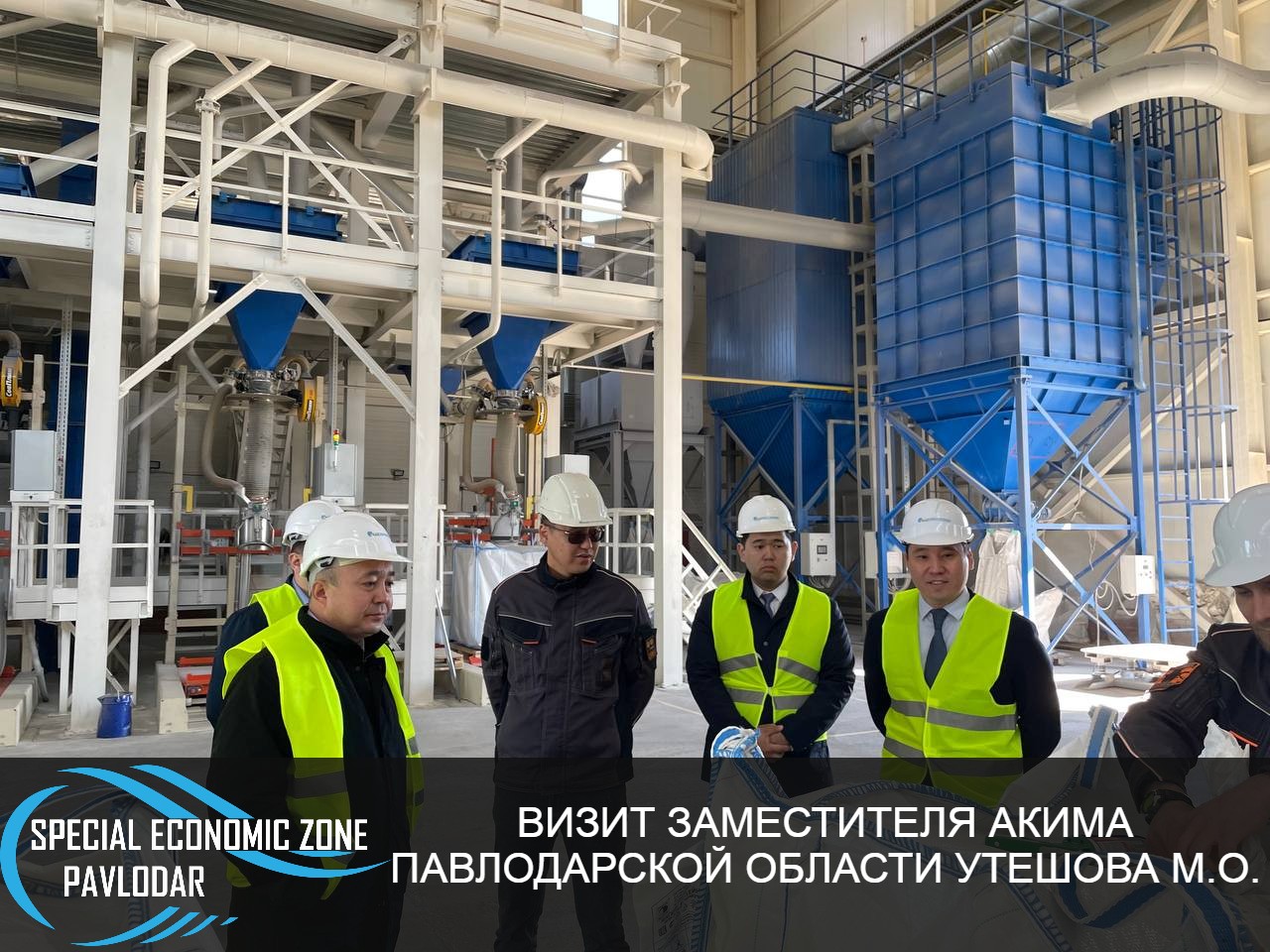 Visit of the Deputy Akim of Pavlodar Region M.O. Uteshov

On April 14, 2022, Deputy Akim of Pavlodar region Uteshov Meiram Olzhabaevich paid a working visit to familiarize himself with the progress of projects in the territory of the Pavlodar SEZ

During the visit, the existing and implemented enterprises of the FEZ were presented.

Meiram Olzhabaevich familiarized himself with the technological process of each project, and also assured of his readiness to provide all possible support for them, emphasizing the importance of developing a special economic zone for the region.
Read more 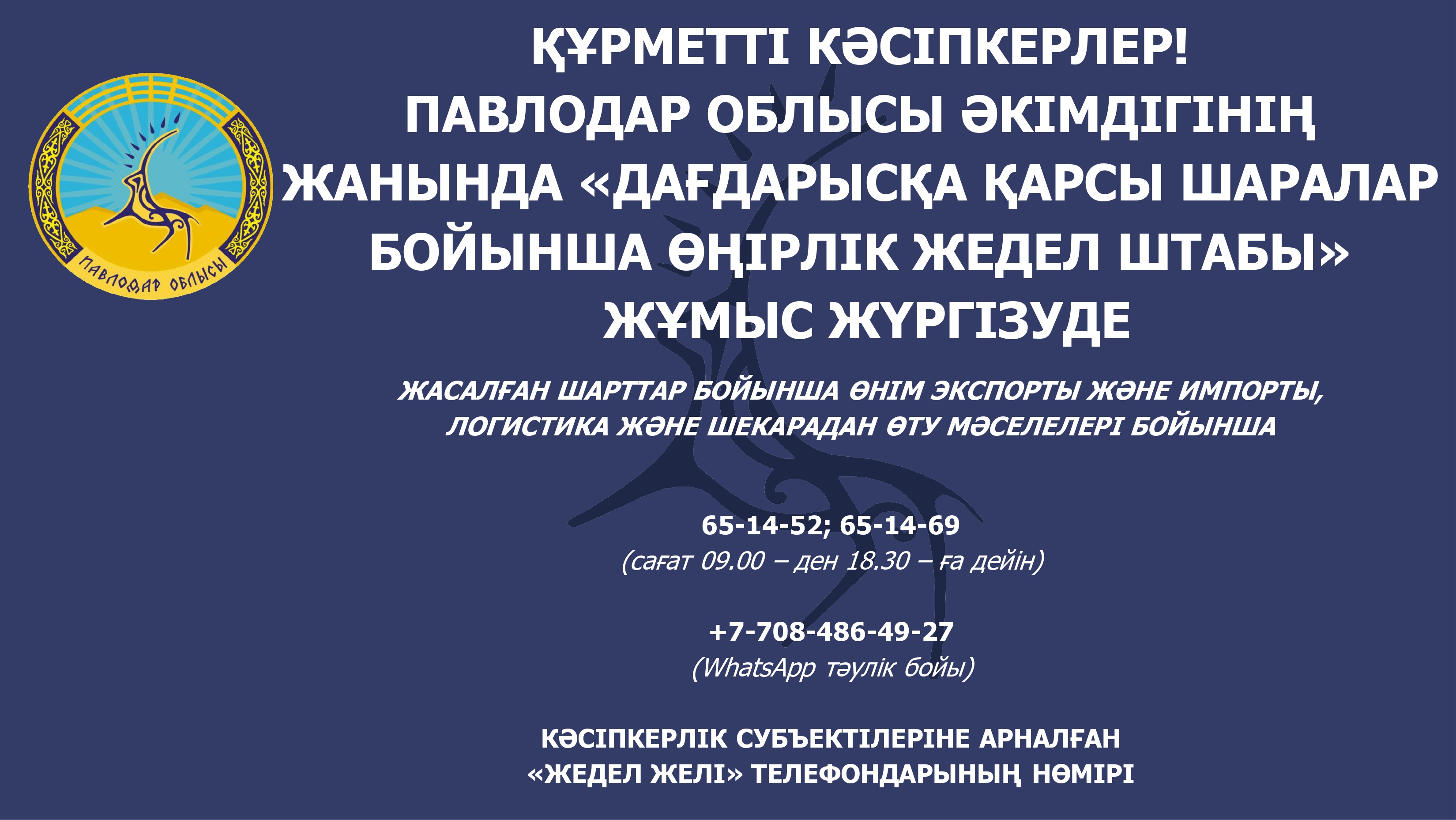 ON EXPORT AND IMPORT OF PRODUCTS UNDER SIGNED AGREEMENTS, LOGISTICS AND BORDER CROSSING 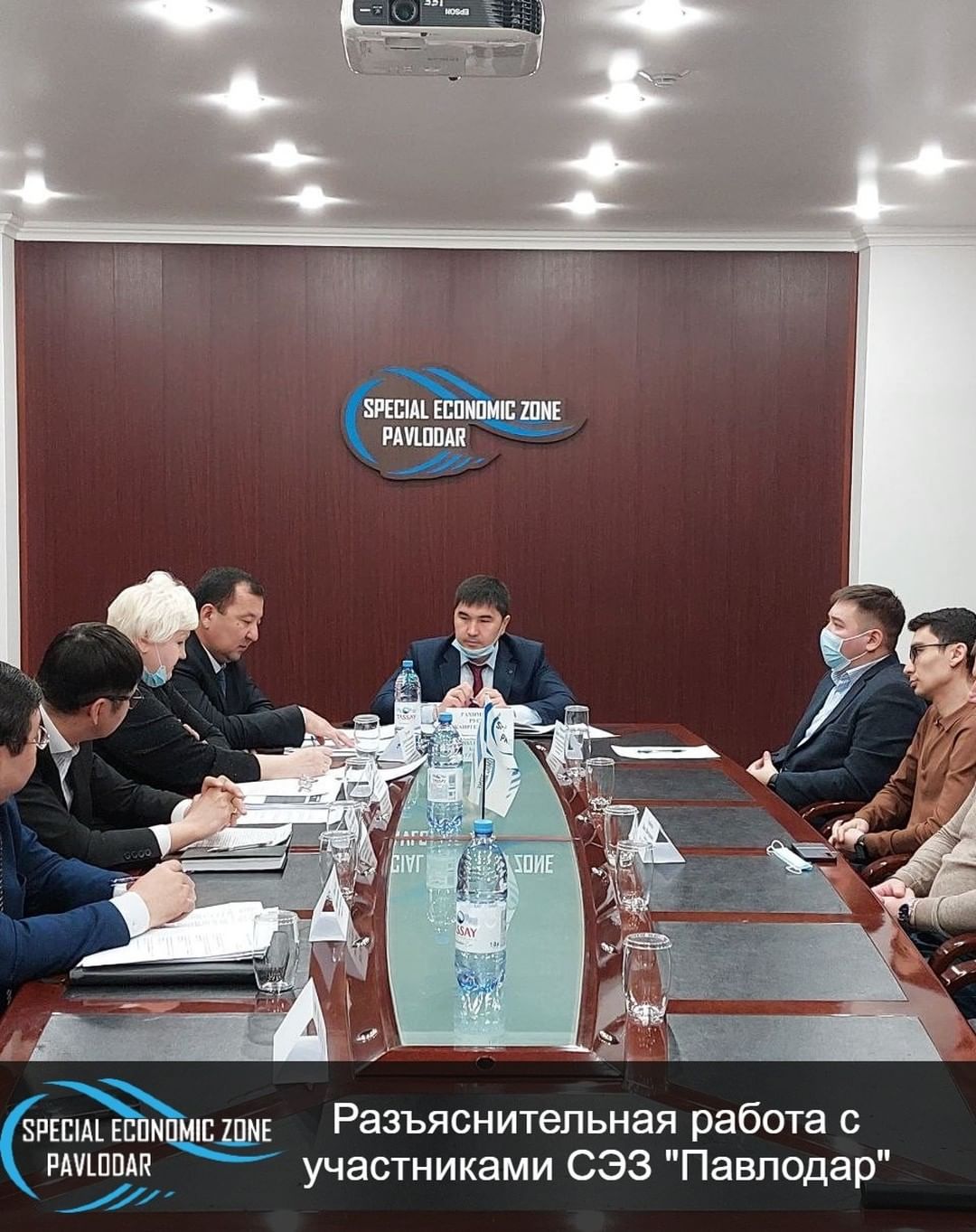 Explanatory work with the participants of the SEZ "PAVLODAR"

On March 10, 2022, a meeting was held in the presentation hall of the SEZ "Pavlodar" to explain the measures of state support, in particular the implementation of customs control on goods transported on the territory of the SEZ.
Ruslan Kairgeldyuly, Deputy Head of the Department of State Revenue for the Pavlodar region, Rakhimberdy, as well as the head of the customs post of the Pavlodar FEZ, Iseev Dulat Baymukhambetovich, addressed the residents of the Pavlodar FEZ.
During the meeting, questions were raised about the customs clearance of goods, ensuring the checkpoint regime on the territory of the FEZ, the procedure for the import and export of goods from the territory of the FEZ, as well as the mandatory periodic customs declaration of goods in the ASTANA 1 information system. 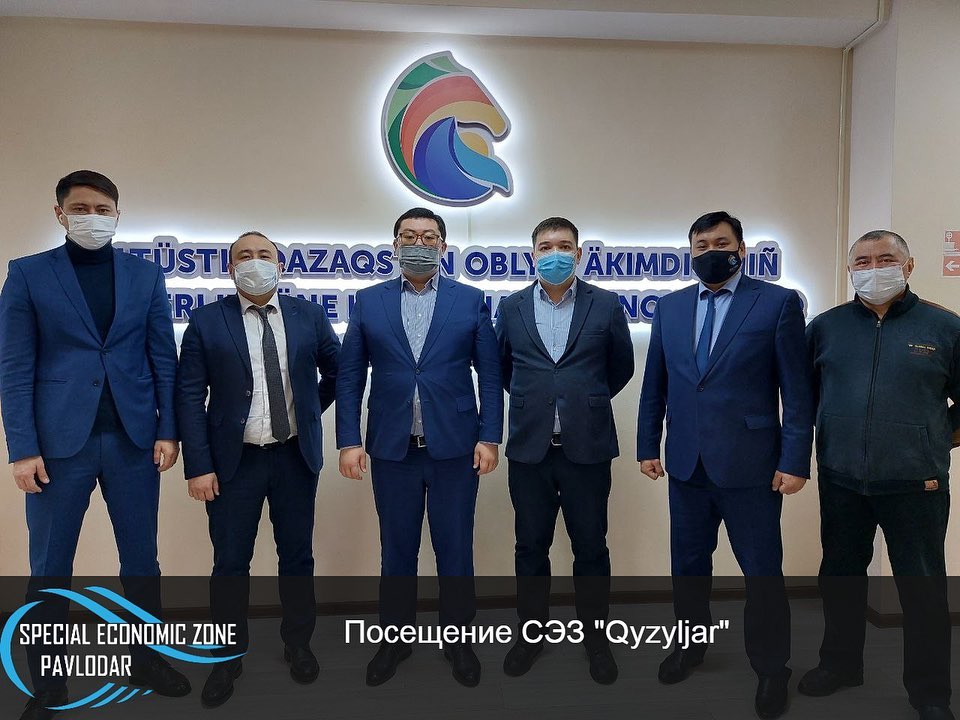 Visit to the SEZ "Qyzyljar"

On February 17 of this year, within the framework of the working visit of the delegation of the Pavlodar region to Petropavlovsk, a meeting was held with representatives of the FEZ "Qyzyljar"
. The purpose of the visit was to familiarize with the activities of the CC FEZ "Qyzyljar", exchange of experience in marketing promotion on the world market, strengthening interregional ties, as well as the development of mutually beneficial business cooperation between enterprises of the regions.
FEZ "Qyzyljar" was established on October 11, 2019 to develop the creation of highly efficient, including high-tech and competitive industries.
The territory of the FEZ "Qyzyljar" consists of 4 subzones. The total area of the FEZ territory is 212.3 hectares.
During the trip, the potential of the FEZ "Qyzyljar", the dynamics of its development and a number of successfully implemented projects were demonstrated.
At the end of the visit program, a memorandum on mutual cooperation was signed between the Special Economic Zones of Qyzyljar and Pavlodar. 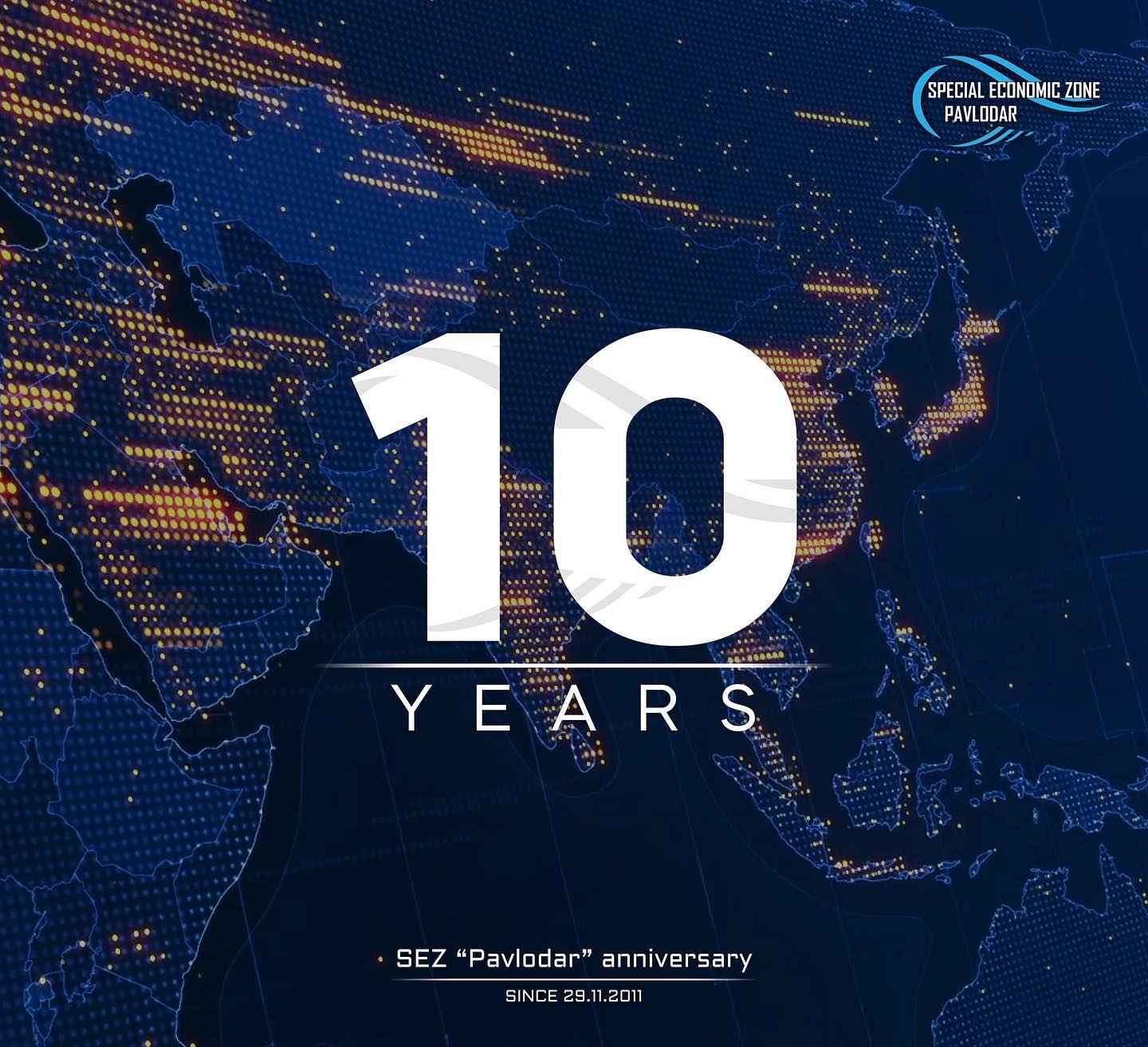 The special economic Zone "Pavlodar" is 10 years old!
By the Decree of the President of the Republic of Kazakhstan on November 29, 2011, a Special economic Zone "Pavlodar" was created on the territory of the former Pavlodar Chemical Plant. In accordance with the state program of industrial and innovative development, the chemical and Petrochemical industries were identified as priority activities of the FEZ. According to certain priorities, together with the anchor investor in the field of chemistry, Caustic JSC launched the production of detergents and cleaning products of Belizna PV LLP. Also, the production of disinfectants was started at the production facilities of Caustic with the support of the National Agency for Technology Transfer in 2013. In the same year, the construction of AgroHimProgress and the oil coke calcination plant of UPNK PV LLP began.
By the fifth anniversary of the FEZ in 2016, 7 enterprises were already operating at the FEZ, the production of oils and lubricants was put into operation – Evooil Kazakhstan LLP and aluminum silicate microsphere Metallogamma LLP.
Studying the best practices of SEZ organization in the world, the concept of phased development of the territory and cluster development of production was adopted. What it gave: rational use of budgetary funds invested by the state. To date, the efficiency of investing budget funds has not fallen below 1 to 10, i.e. 10 tenge of private investment has been attracted for 1 tenge of invested budget funds. In addition, taking into account the regional potential, priority activities were supplemented with metallurgy, production of finished metal, plastic and rubber products. This made it possible to attract foreign investment in the processing of aluminum, the production of car wheels, components for lighting devices, the production of sanitary products made of artificial stone.
4 innovative projects of SEZ "Pavlodar" (production of disinfectants, coagulants for water and oil purification, processing of ash and slag waste of CHP) are supported by grants from NATR and the Science Foundation.
The target indicators approved by the Government Decree have been fulfilled by 2021. Today, 30 enterprises are participants of the FEZ "Pavlodar". The investment portfolio of SEZ "Pavlodar" today is 44 projects worth 323.44 billion tenge, of which: 14 operating (69.85 billion tenge).tg); 18 projects under implementation (198 billion tenge) and 12 projects under development (56 billion tenge).
Put into operation this year:
- Kazzenosphere LLP (microsphere production);
- 1st stage of CDR Group LLP (additives for diesel fuel, heating oil);
- LLP "firm Metallex" (production of varietal casting of metals).
By the end of the year, it is planned to introduce 2 more projects worth 2.2 billion tenge, 56 new jobs. (Severhim LLP, ASCOR SOFTWARE LLP).
82 billion tenge of investments were attracted, of which 20.8 billion tenge. foreign direct investment. 1,700 permanent jobs have been created. The volume of production during the period of operation of the FEZ exceeded 195 billion tenge, more than half of the products produced are exported. More than 12 billion tax deductions have been transferred to the budget.
The funds invested by the state for the construction of the infrastructure of the FEZ have already been returned in the form of payments and deductions from investment projects.

On November 26 of this year, the chief expert of the Department of Special Economic and Industrial Zones of the Committee for Industrial Development of the Ministry of Industry and Infrastructure Development of the Republic of Kazakhstan Nurakhmetov N. M. visited to familiarize himself with the current activities of the projects of the FEZ "Pavlodar", as well as the Industrialization Map for 2021 and the business support map of the regions.
During the meeting, the guest was shown the existing projects for the production of automotive alloy wheels, aluminosilicate microspheres, calcination of crude petroleum coke, as well as the production of petrochemical products. 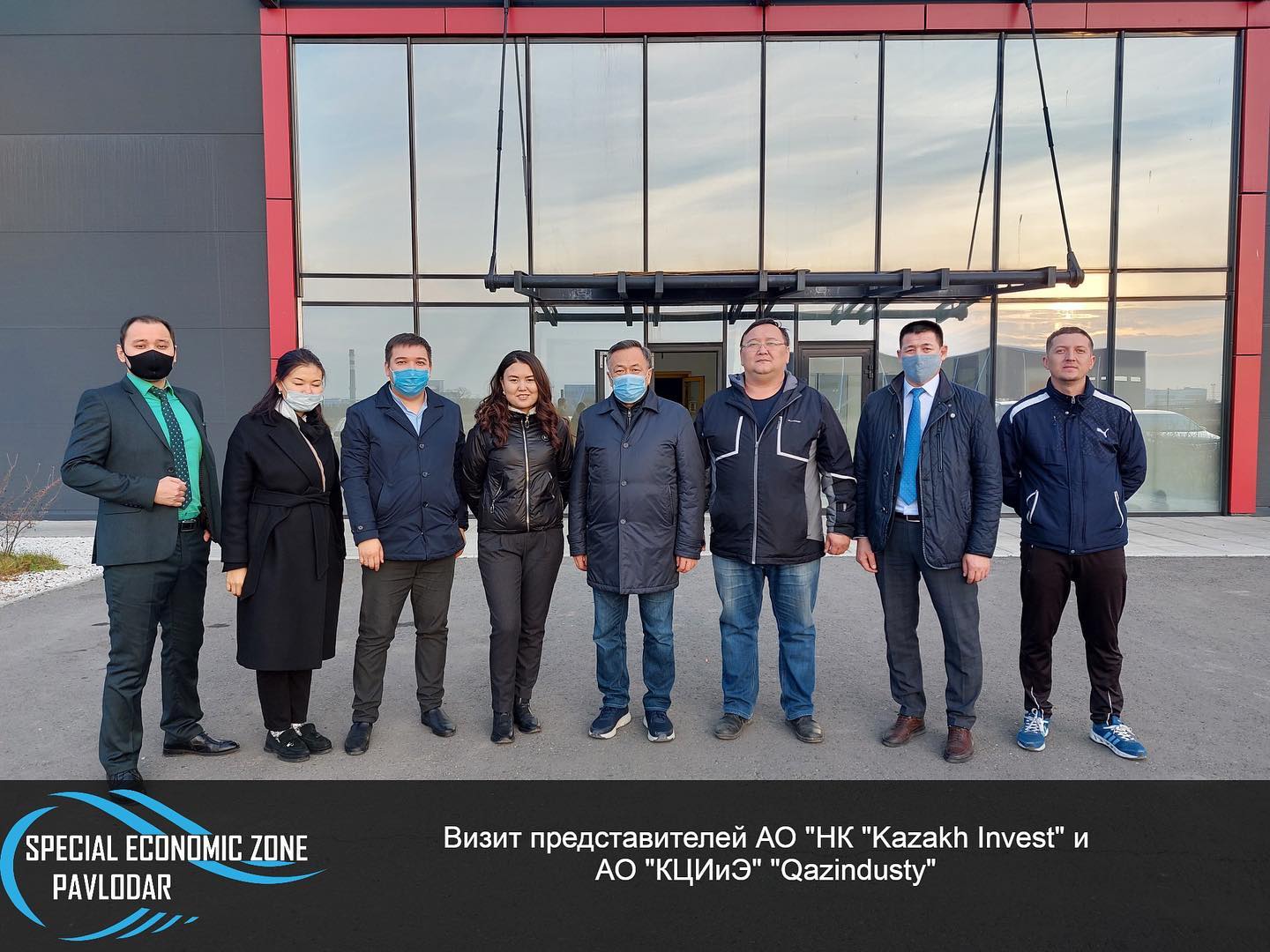 On October 21 of this year, representatives of JSC NC KAZAKH INVEST, represented by the Head of the Regional Block, M.S. Esenov, as well as a representative of JSC KCIiE "QazIndustry", Director of the Center for Development and Monitoring of Support Tools, A.N. Sagiev, visited.
During the meeting, the guests were presented with the opportunities and preferences of the special economic zone. The current projects for the production of agrochemical products, aluminosilicate microspheres, calcination of crude petroleum coke, production of alloyed aluminum, as well as the production of automobile alloy wheels were demonstrated.
The guests spoke positively about the work of the FEZ and the investment climate of the Pavlodar region as a whole, and also expressed their readiness to assist in solving emerging issues of the participants of the Pavlodar FEZ.